So far I’ve analysed album covers from Neck Deep, Waterparks, Movements and As It Is, so now for another popular band in pop punk, Knuckle Puck! 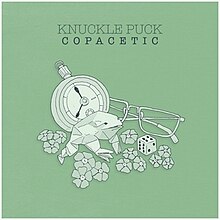 When I first came across this album, I had no idea what the word Copacetic meant. I guess I didn’t really question it until I heard the lyric “Everything’s copacetic” said so many times I thought, yeah I should probably google that. Turns out it means “in excellent order” but the lyrics surrounding are far from suggesting it’s true. Instead, the album’s title is ironic, playing on the way we pretend things are in excellent order when they’re not. It’s this constant convincing and reassuring ourselves that everything is fine but as the song ‘Untitled’ suggests in its long instrumental ending, eventually we realise the silence is too much.

This album cover is slightly more difficult to analyse because I feel like it’s not so obvious. The clock is the clearest in its relation to time and how this perhaps affects our mood when we leave our emotions repressed for too long. I feel like the glasses represent clouded vision and how it’s hard to treat ourselves with the same outlook that we give to other people, since often we don’t help ourselves as much as we should. I guess the dice is the lottery of pain. We roll the dice and we either feel great or we don’t and that luck is just part of life.  The frog and the flowers, however, are a bit more ambiguous. I initially saw the flowers as four leaf clovers at first, tying in with the idea of luck, but they’re not. But maybe, that’s the whole point. Maybe the point is that sometimes we see things in a certain way even though that’s not how they are. The frog could be this obstacle in our mind jumping to conclusions and causing conflictions to bounce around inside our heads. There’s so many different ways you could interpret this cover but that’s what I love so much about it.

What do you think?