I’m not actually sure how long I’m going to continue this series but I thought I might as well keep going for the time being! If you want to check out the previous bands covered you can follow the links here: Neck Deep, Waterparks, Movements, As It Is and Knuckle Puck. 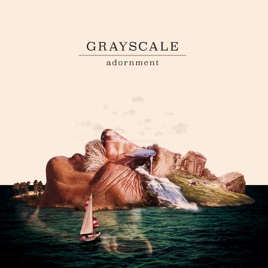 This time I’ll be analysing Grayscale’s album ‘Adornment’ which I think is one of the most unique covers of them all. On first glance you don’t really notice that it’s actually a head floating in the water but I love how it’s disguised as a piece of land. I think it’s been created this way to show the ways in which we hide ourselves from our pain. The man here is drowning in water and yet he puts on this front that everything is okay, that he is making a home out of his life (or his head, literally) even though he’s struggling. He’s invested in sunglasses to protect him from the light – a minor problem – but he won’t invest in sorting out his major problem – the fact that he’s almost drowning and doing absolutely nothing about it. As crazy as it sounds, I actually really relate to this. I often ignore all my major problems and like to focus on other things that don’t matter as much instead. I’m starting to emerge from those waters now though and actually face things head on which is definitely a good thing. Don’t be this dude making an island of himself in a shore no one can reach. You’re a lot more important than that.