“…this is what happens when you live on Earth. You crack. You hold reality in your hands until it burns and then you have to drop the plate.”

Having already read ‘Echo Boy’ , ‘Reasons to Stay Alive’ and ‘Notes on a Nervous Planet’ (and written blog posts on them), you could say I’m a pretty huge fan of Matt Haig. I heard of ‘The Humans’ quite some time ago and yet had pushed it away as not my kind of book, because why would I want to read about alien life? And yet this book is so much more than this. 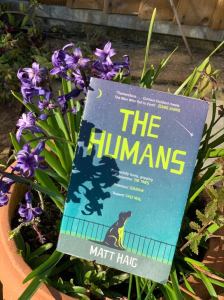 In short, the book is about an alien from the future taking over the body of a mathematician on Earth to prevent him from proving the Riemann Hypothesis and to, therefore, save the planet from advancing (because humans supposedly can’t deal with this level of progress). At the start, you are thrown into Earth as someone who has absolutely no idea about the planet and how humans act. It’s actually pretty funny, the comments the alien makes on other humans and the way he believes he is able to act, because he doesn’t know what is expected at all (hence he runs around the town at night naked, getting arrested – read to find out more, I guess).

It is hard not to cringe at some of the things the alien considers as acceptable, and yet I felt this urge of pity since the beginning. The alien has come from a perfect future – one where no one feels pains, or love, or anything in between. But what was so amazing about this book was the way it gets you to think about emotions and how important they really are. Yes, we feel pain, but isn’t that better than feeling nothing at all?

Behind the surface of the story, it’s not only about the alien learning how to live on Earth, but it’s fundamentally about the depths of humans and the way we think and act. Matt Haig explains himself, in the back of the book and in ‘Reasons to Stay Alive’, that the book actually represents the isolation of depression and coming to love the world and humans again. This completely changed my perspective of the book into something that metaphorically delves into the world of understanding mental health. The alien symbolises the change in mental health as it can drive someone to seem like a completely different person, or incapable of living like anyone else, and yet inside they are still the same as anyone, because we are all humans and we all think and feel.

There is one particular moment where the alien speaks to his “son” and says ‘maybe we should try not to understand so much, and accept some more.’ and this is so damn important. We can never be fully understood by someone who is not ourselves (how can we, when we are all unique beings with our own private mind?), so acceptance is the only way we can move forward. Reading the relationships the alien built with this family that wasn’t actually his and vice versa, shows the purity of loving and accepting others as your own even if they’re not who you know them to be, or want them to be.

I particularly loved the focus on change in the novel because it made me realise that change isn’t just necessary in that we are constantly moving forward in life, but necessary for our own health and our own survival.

These were two of my favourite quotes in relation to this:

“The single biggest act of bravery or madness anyone can do is the act of change.”

“I realised, though I was on Earth, I had been living this past year as I had always lived. I was just thinking I could carry on, moving forward. But I was not me any more. I was a human, give or take. And humans are about change. That is how they survive, by doing and un-doing and doing again.”

Not only is change about bravery into the unknown, but allowing yourself to change through changing your surroundings. When I read “I had been living this past year as I had always lived” it made me think, what can I change this year to make it different and to make me feel better and more at home as a person? There have been times in the past where I had been reliving a year the same as the year before, and looking back I realise I shouldn’t have, because it actually had a huge effect on the way I viewed myself and the world. Changing things up inevitably brings fear, but also excitement. And isn’t excitement and new things what we live for? It’s human nature to get bored or fall into unconscious habits and pushing yourself out of these things is what gets you to rethink your life and yourself.

Matt Haig is so good at getting me to think beyond the book, into my own life and changes I can make, and for that I’m so grateful I have his books to read. The feeling I get when I read or listen to music or watch films was perfectly explained in this short extract and so, naturally, it makes sense to end on this note:

“It takes time to understand humans because they don’t understand themselves. They have been wearing clothes for so long. Metaphorical clothes. That was the price of human civilisation – to create it they had to close the door on their true selves. And so they are lost…that is why they invented art: books, music, films, plays, painting, sculpture. They invented them as bridges back to themselves, back to who they are.”

You can find me on social media here:

9 thoughts on “‘The Humans’ by Matt Haig (Book Review)”