Over the last few months, 3 of my favourite bands have released new music and so of course, I want to talk about it! 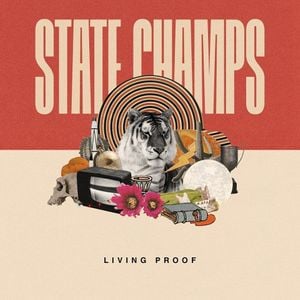 The first is by a band called State Champs who I’m actually going to see in concert in October at my university! I’m so so hyped about it and glad that their album reached and exceeded my expectations because it means I’m even more excited to see it all live! Their album is called ‘Living Proof’ and I have to say I love every song on it. I heard ‘Crystal Ball’ and ‘Dead and Gone’ before the release and these songs are seriously catchy. I think even if you’re not a massive fan of pop punk, this album may take you by surprise as I know a couple of people who like ‘Crystal Ball’ even though they don’t like the genre itself.

My favourite songs are: Criminal, Crystal Ball and Something About You (click the song to hear it!)

The second band I want to share with you is Real Friends! I was lucky enough to see this band when I went to see Neck Deep in concert last year as they were supporting. I really admire the lyrics this band produces, especially since I’m into writing myself, and I loved their previous album for the way they portrayed ‘the home inside your head’ as a metaphor for the inner workings of your brain and your emotions. Their new album ‘Composure’ definitely exceeded my expectations! At first, I wasn’t so convinced, however the more and more I listened the more I realised that they’ve really come so far. The chorus’s stand out a lot more powerfully than those from before and again, the lyrics come to no faults.

My favourite songs are: Me First, From the Outside, Get By and Ripcord (again, click the song to hear it!) 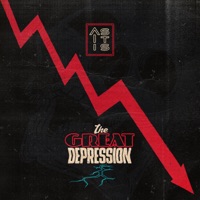 As It Is are the third band I want to talk about and their new album only came out just under a week ago. It’s called ‘The Great Depression’ and tackles the struggles of depression, especially in boys, but also mental health in general. One of the reasons I am so drawn to music of the pop punk genre is the depth to the lyrics and that a lot of the time they do relate to mental health or to my own struggles, however not so explicitly as As It Is did with this album. However, I think it is much needed. I love that they’re standing up as a voice for those who find it hard to speak up and I honestly think they’ve presented it in such a raw and honest light. It was pretty emotional listening through the tracks, especially when tuned into the message of the lyrics, but I think it’s so important to help others understand the battles that go on inside people’s heads since it is not always obvious. It is also somewhat comforting to know that it is not only you who feels a certain way. I highly encourage anyone to listen to this album, and that even if you’re not a fan of the music please do read the lyrics, because they are crucial and unbelievably powerful.

My favourite songs are: all of them?? can I even say that?? but The Hurt, the Hope really caught me off guard in terms of emotion and lyrics (if you’re prepared to cry, click it to listen)

The band As It Is announced their new album ‘The Great Depression’ a few days ago, about the societal romanticisation of depression and aiming to destigmatise this. Being mental health awareness week, this is such a great time to start putting this view in place and I’m really looking forward to seeing the rest of the album – whether I like the music or not, because I think the lyrics will be what are most important.

I do, however, absolutely love the first single they’ve released! It’s called ‘The Wounded World’ and Patty has gone all out and dyed his hair black for the cause. I love the repetitive echoes of ‘we’re all to blame for the wounded world’ that frame the song and 2:18 is the greatest thing I’ve ever heard. You have to listen. I am actually obsessed. There is also a lyric that I particularly wanted to share because I think it holds an important message:

‘You can’t pull back the trigger and then point the same finger.’

For me, it seems this line is calling those out who dare to pull the trigger on people (manipulate, bully, harrass, whatever it may be), and then blame someone else for their own actions. And I think this is so important when it comes to mental health, because part of what affects someone’s mental wellbeing is when people can’t take responsibility for their actions and instead lead others into a world of lies and deceit. I love the way Patty screams these lines because it really gets the anger across at those who do this and to remind them that it really does hurt the victim. Pointing that finger at someone else might as well be equivalent to pulling back the trigger and actually releasing it.

I’ve been a fan of As It Is since their album ‘Never Happy Ever After’, but with their following album ‘okay.’ they took on a more pop-py vibe and I didn’t like it as much (with a few exceptions such as Austen, Soap and No Way Out). However, if ‘The Wounded World’ is anything to go by, their new album could be going into a harder direction and I’m totally loving it!

I’ll leave the link to the song below. If you’re fan of pop punk, you’ve 100% got to check it out! If not, give it a listen anyway simply for the lyrics more than anything.

The fourth band of this series is As It Is! Whilst Neck Deep and Movements have their own thing going on, as shown in previous posts, As It Is is very similar to Waterparks in their happy-but-not-really-so-happy approach.

I’m going to be analysing their most recent album ‘okay.’ where the title, in itself, speaks of a false pretense of pretending you’re okay when you’re not. What I love about the cover, and also all the artwork surrounding this album, is the way on first glance you initially see a perfect family scenario. There are happy faces and ‘perfect’ houses and it just looks like a typical idyllic day. That is until you notice the hidden details, like the grenade casually sitting in the bicycle basket, and suddenly you’re like wait, has that always been there?

For me this typifies the perspective on family as something that isn’t really known until you look closely. We see other people’s lives from the outside and we try to understand but we never could. We see these small details if we look hard enough but they don’t sit quite right with the context. On looking at this album cover it’s hard to comprehend how a smiling lady and a grenade go hand in hand. Except we see this all the time.

A lot of the time I think about what people are hiding, because I find it interesting to think how much people can keep hidden whilst still remaining an open person. A lot of people hide more than you think. This album wraps these feelings into a single cover that takes us off guard but reminds us that we’re not the only ones pretending or moving forward whilst wary of a grenade blowing up right in front of us – because sometimes it really does feel like we’re that close to everything being over.

First Michelin star experience - accidentally! 😅😊
Winter Wonderland ❄️✨
Illuminated lights at Windsor Great Park ✨
A beautifully written reflection on the complexity of intertwining friendships and relationships. I didn’t enjoy this one as much as Sally Rooney’s other books, but it provoked some interesting questions and discussion points 📖
somehow the only photo of autumnal leaves I’ve managed to capture this year 🍁
a bit of gloomy autumnal candlelight 🕯✨ I love watching all the wisps of smoke after it’s blown out
If you’re having ice cream, why not add candy floss? 🤷‍♀️
Camden trip & @orlagartland concert! ☺️🎶
it’s been a while since I’ve read such an experimental piece of writing, especially as a novel too. this one was intriguing, thought-provoking and kinda plot-less. I’m not sure I would read it again yet at the same time it was worth the experience 🤔
✨ “Your life is not something that someone gives you, but something you choose yourself, and you are the one who decides how you live.” ✨